Happy Film Review Day!
Usually that day is a Wednesday but I missed Wednesday and still wanted to post it out. For those of you who are knew to my film reviews, usually I post them every Wednesday or every other Wednesday depending on what films I have watched. I have been incredibly lame at watching films and posting reviews recently, sorry about that I will work harder I promise.

Blade Runner 2049
A young blade runner's discovery of a long-buried secret leads him to track down former blade runner Rick Deckard, who's been missing for thirty years. - IMDB 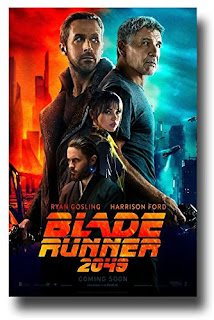 
Holy Dystopia Batman!
Blade Runner was one of those films that set the pace for cyber punk dystopia everywhere. There was a lot of tension when it's sequel was announced and many where worried if it could live up to it's forefather.
For me Blade Runner 2049 is as beautifully dystopian as it's original, you feel fully immersed in this drably rich environment. The lights, the rain, architecture, all of it comes together to build this world and it's wonderful to view.
The story works well though it doesn't beat the original for me, of course this is a totally different story and it wouldn't be fare to compare it that way. Ryan Gosling surprised me with this role and I really think he did a fantastic job. I really loved him along side Harrison Ford. 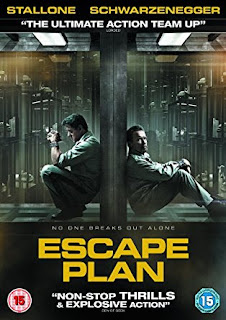 Stallone and Arnie!
I do not know why I hadn't watched this film before, it's very much one of my favourite kind of films. Anything like Hustle, the Oceans films, Now You See Me, I like.
Escape Plan had me glued to the screen for the whole film, I didn't want to miss a thing. Stallone And Arnie was such a great choice for this film and I'm not even mad that Stallone's role could have been Bruce Willis. I love that guy!
It's paced well, has fun dialog and gives a fun nostalgia for 90's and 80's action films. It's a must for a movie night with lots of popcorn.

The Death of Stalin
Follows the Soviet dictator's last days and depicts the chaos of the regime after his death. - IMDB 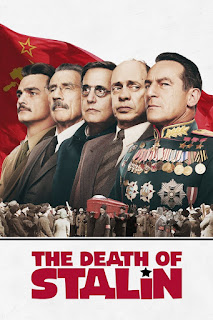 Not what I was expecting at all!
I am not one for War films, war documentaries or things about world leaders, politics (example: The Iron Lady, W. ). Saving Private Ryan took me while to watch, I just can't do war because it gets to me.
Going in I knew The Death of Stalin was a comedy of such but I still a little worried that I wasn't going to like it. It turns out I'm very glad I watched it, the characters were fantastic and Jason Isaacs was my favourite character in it. He was brilliant! Each scene is shot very well and there isn't a moment that made me lose interest at all. It was also incredibly funny, it's well worth the watch.

Thor: Ragnarok
Thor is imprisoned on the other side of the universe and finds himself in a race against time to get back to Asgard to stop Ragnarok, the destruction of his homeworld and the end of Asgardian civilization, at the hands of an all-powerful new threat, the ruthless Hela. - IMDB 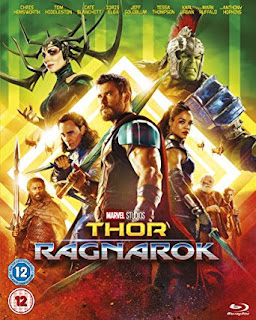 
"Piss off ghost!"
Thor: Ragnarok directed by Taika Waititi who made such films as 'What We Do In The Shadows' and 'Hunt For The Wilder People'.
Thor has always been a great character especially with the addition of Loki. Thor Ragnarok is no exception and I think it's the best Thor film yet! Taika Waititi has brought a few people over that have previously been in his films as well as his own humour and it really shows. He even jumps in and does the voice of Korg one of the many CGI characters. If you need a laugh as well as an action/scifi fix then Thor: Ragnarok is your film!