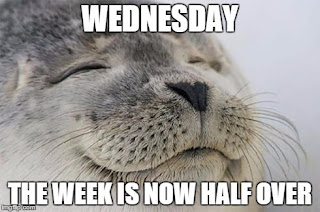 Happy Wednesday!
Hump day is upon us!
It was pretty chilly this morning, especially on the walk down to the station. The sun does seem like it is trying to shine now so maybe we'll get a another nice day.
--
I got a surprise this morning in the form of one of my train friends turning up for my train. Being that the train times had changes, where it's going has changed I was expecting not to see him in the mornings any more. Today he wanted to test out a new route to work to see if going into London Bridge and changing to another train would work. Either way I got to have a chat with him and catch up on what he's been up to.
--
Mondays train journey home was rubbish due to a lightening strike causing power failure. I had to take the tube over to Victoria to get a train home and didn't get home until after 8pm, I was not amused. It was also the first day of the new week day timetable because of the new 'Thames Link Program'. I foresee many delays until the teething issues are sorted.
--
Blake did a game swap with a friend the other day, he finished 'God of War' the other day. He swapped it for 'Far Cry 5' so that his friend could have a go at God of War, it's always good since payday is always further away than you'd like. We started the first part last night and will probably continue tonight, so far I'm loving the graphics and the map layout.
--
I have been a lot more writing recently which is amazing because I am beginning to get out of my slump slowly but surely. I'm still working with Rimworld mods and deciding on what to feature in my E14 article. Check out their other posts as well, you never know what you might find.
--
In addition to that I am going to start a 'Friends of Cloud Zombie' post. These posts will talk a little about each one of my contacts, what they do and about themselves. I will start with my current list which you will see below todays song of the day and eventually lead onto new friends as I go on.
--
Thank you so much for reading my blog!
I hope you all have a wonderful Wednesday!