2) The object immediately to your left is your only weapon. Will you survive?
A golf umbrella and I might be able to survive depending on how I used it, it does have a rather large metal spike on the end.

3) If you were a zombie who would you want to bite?
Hey I'm a zombie I'm not going to be choosy. 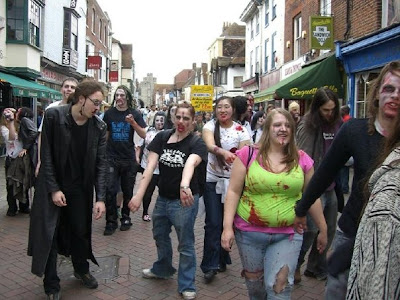 4) What would your survival plan be?
I would find a place to fortify with high walls around it so I could build up a community and stock pile every ounce of food I could get my hands on.

5) What would you do if your parents became zombies?
I think it would be dependent on whether there was a cure or not, if I could keep them confined properly until they were cured that would be good. I do understand on the other hand that if there was never going to be a cure I would have to put them down before they infected anyone else.

6) Do you want the zombie apocalypse to happen?
Of course I wouldn't. If one did I would a least like a heads up so I could get organised, I am not great at running and would need time to find a place to keep safe.