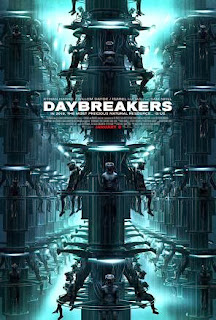 Daybreakers
Awesome film!
Daybreakers is the best vampire film I've seen in a long time. This film has Sam Neill, Ethan Hawke and William Defoe.
This film makes us fear what we fear most, Death.
Imagine a death that never ends, no more sunshine no more heartbeat, no more grows old, just a hunger for blood and the fear of that food source running out. When the entire population are now vampires and the remaining human population is nearly extinct. I love how Daybreakers makes you think if the tables were turned on you.


I hung on every scene of this film and could not stop watching for a moment. I give this film 10/10