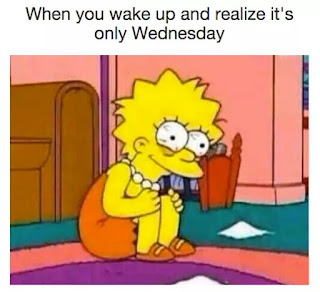 Happy Wednesday!
Another chilly morning/day, Blake's still ill so I walked down to the station again by myself. This gave me the excuse to put my headphones on, entertaining and a great use for earmuffs. It was super chilly on the train this morning as well and I'm glad I had an extra layer in the form of a cardigan.

Last night was the usual eat dinner and watch something. It was mostly YouTube based game themed channels like: PlayStation Access, Outside Xbox, The Yogscast. Blake hasn't been well and we went up to be earlier so I could watch videos in bed while he snored next to me. It was a mostly win, win situation. Apart from Blake being ill that is.

I'm not one for mobile games (phone games) but I have really been into 'Eden' a lot recently. I have been playing in on the train the past few days. I love the astatic of the game and you can play fine without having to spout extra money into it. Yes there is an in game currency but there's ways around it.

I miss the days of the 'Nights' games, do you remember those?
New York Nights, Miami Nights.

They were silly but they were a guilty pleasure game, I usually don't like mobile games because of the in game charges. I like Plague Inc, Pokémon Go, Villagers, things like that. Building games, Simulation games and RPGs are usually my bag. Sadly games on phones and tablets just don't give me the same hit PC and console games do.