Chain Letters and Why I Hate Them

August 20, 2015
Have you ever received a message on social media from a friend or some random person along the lines of "There was a creepy doll in a house and it killed everyone that lived there. Share to 20 other people or you will die at midnight. The doll will come to your house and that's the last you will ever see".
Yeah I seem to be getting these a lot recently and I really do not care for them at all. Most of the time the story doesn't make sense, the spelling and grammar is terrible and they sound stupid if you actually read them out loud. 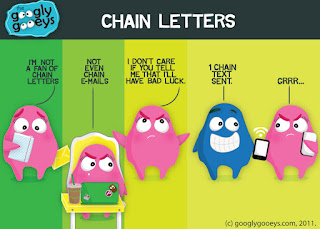 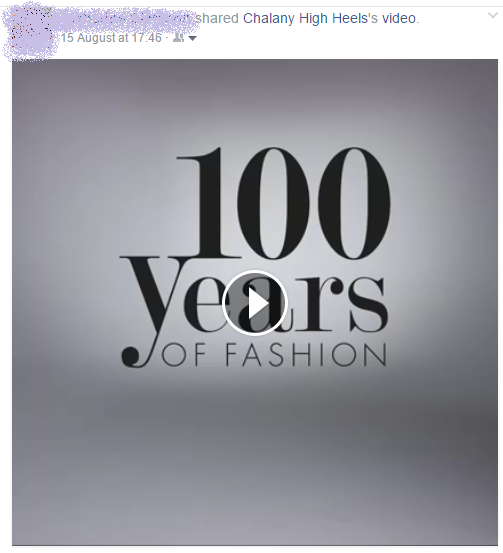 It was fine at first because I got the normal sort of comment you would get on a social network, then this turned up.

I think what is it now rolling my eyes at the screen. 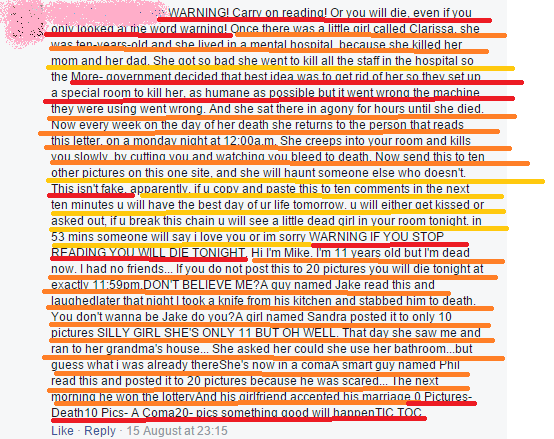 I click on see more to fine this gem of a crappy horror story.
"Warning! Carry on reading! Or you will die, even if you only looked at the word Warning!"
Come on!! Give people a chance to back out before you threaten them with death. Then you get the story about little scary Clarissa and how she came to be in the mental hospital she how resides in.
They basically decided poor deranged Clarissa was a lost cause and THE GOVERNMENT (More Government) decided it was best to to do her in using a special death room. Is one little girl that much of a threat to THE GOVERNMENT?!
And so their shitty death room didn't work and poor homicidal Clarissa was left mortally wounded inside the death room to die alone by the hospital staff and THE GOVERNMENT to die alone.
"Now Every week on the day of her death she returns to the person that reads this letter. On Monday night at 12:00am she creeps into your room and kills you slowly by cutting and watching you bleed to death".

"Now send this to ten other pictures on this site and she will haunt someone else who doesn't".

"Apparently if u copy and paste this into the next ten comments in the next ten minutes u will have the best day of ur life tomorrow. u will either get kissed or asked out, if you break this chain you will see a little dead girl in your room tonight. In 53 minutes someone will say I love you or im sorry".
To be honest I am in a long term relationship so I hear I love you and I'm sorry (im sorry) more than once a day.

Then the story goes on with new people little dead Clarissa has killed in her ghostly form.

"Hi I'm Mike, I'm 11 years old but I'm dead now. I had no friends"
Well that's kind of sad Mikey boy, why were you on a social media if you had no friends?

Well Mike you've kind of up'ed the anty a little, before it was just 10.
"DON'T BELIEVE ME?! A guy named Jake read this and laughed later that night I took a knife from his kitchen and stabbed him to death. You don't wonna be Jake do you?"

"A girl named Sandra only posted it to only 10 pictures SILLY GIRL SHE'S ONLY 11 BUT OH WELL. That day she saw me and ran to her grandmothers house... she asked if she could use the bathroom .... but guess what I was already there now she's in a coma".

Well I now know the one of the authors of this post is American because nobody says bathroom if we mean toilet in the UK.

"A smart guy named Phil read this and posted to 20 pictures because he was scared ... the next morning he won the lottery and his girlfriend accepted his marriage".

Yes his marriage, not marriage proposal but marriage. Well Phil I think you are a little bit of a wimp letting this story scare you.
"0 pics - death 10 pics - coma 20 pics - something good will happen Tic Toc".

I laugh at your threats!
Then I responded with "I do hate chain messages". expressing my dislike of her posting this crappy message on my post in which she replied. "Yeah so do I Hun not taking no chances". 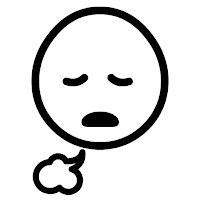 I then proceeded to prove how alive I was and still am. 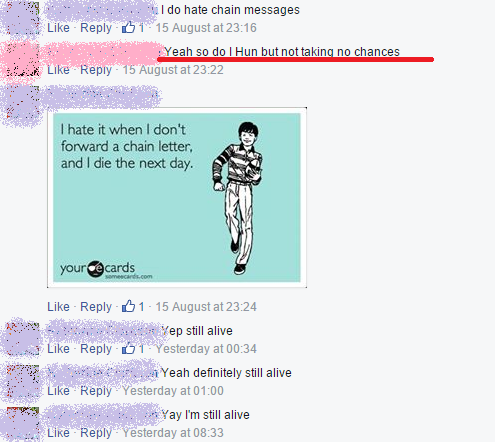 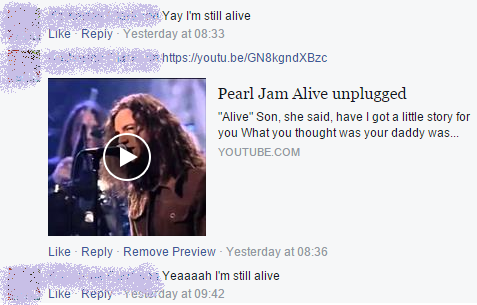