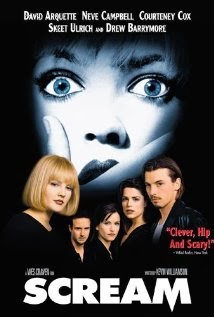 Scream
I’d firstly like to say that Scream is not an super amazing film but I enjoy none the less and so do many other people. The way people are killed is based on traditional horror rules. You can never have sex, Never say I’ll be right back because you won’t be back.
Rose McGowan’s nipples as tense as her through most of the film, Courteney Cox being a kick arse news reporter and Neve Campbell makes it believable that she’s actually scared in this horror movie rule book. I always find myself cheering on Sydney throughout the film and get goose bumps every time.
As silly as the film sounds to anyone I wouldn't want ghost face in my house on a dark night. I give this film 8/10